"O Atum who went forth as the Great One of the waters, having power as the Double Lion, announce in your own words to those who are in the Presence that I come as one who is in their midst, and give command on his behalf to the crew of Re in the evening. May I live after death like Re every day. Was Re born yesterday? Then when will I be born? May every god be joyful when I live just as they were joyful when Ptah lived, when he came forth from the great Mansion of the Prince which is in Heliopolis." 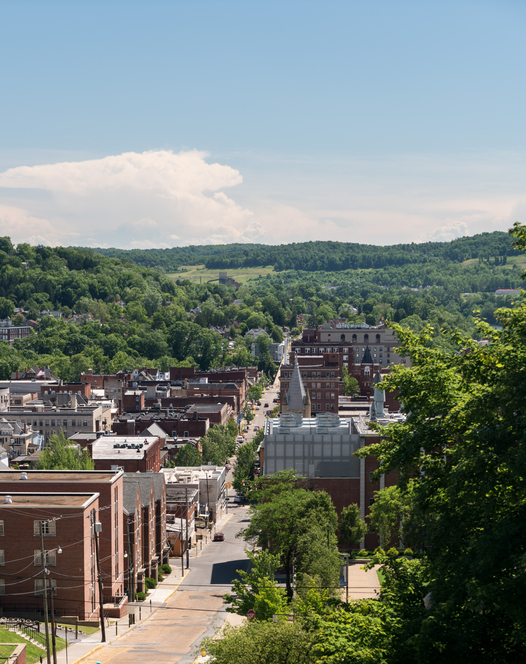 The scene opens on the beautiful mountains that littered the Appalachian Trail. The Blue Ridge Mountains seemed to cast a spell on those that wandered them or even gazed upon them. The mountains themselves had once housed the mountain people that lived off of the land, and enjoyed the beauty around them. The camera moves over the towns that dotted the countryside. Soon the camera comes to a stop on the town of Weston West Virginia. The town looked like it was out of a painting of what mountains were once like. The old buildings still held businesses and the streets were freshly paved once again. The smell from the local bakery and restaurant seemed to linger and mix together making ones mouth water. The sound of traffic filled the streets, as the sound of birds drifted from the tall trees that could be found in the park that sat in the center of town. The camera moves over the town and soon comes to a stop on a very old, and massive brick building. 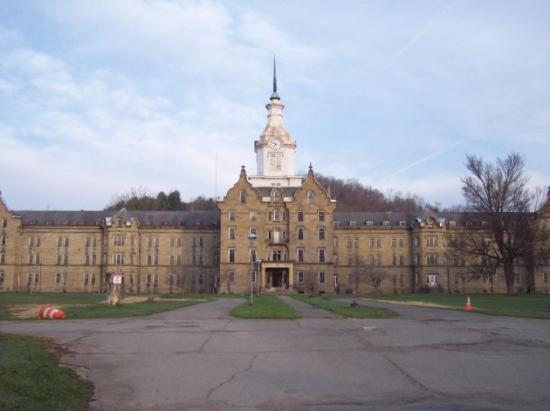 This was the Trans Allegheny Insane Asylum. The old building loomed over the area like an open wound that had festered and now lingered. Some of the windows had been broken, and covered up, while others remained in one piece but were dusty, and seemed to hold secrets behind closed doors. The once vast bright green lawns were now brown, and dead, while the tall trees n longer held leaves and the only green that could be seen was that of the ever greens that had been planted. A cool breeze moved along the grounds, casting a chill in the still early fall warm weather. A small group of people had gathered in front of the building waiting to go on the historical tour of the old buildings. At the back of the group we see a familiar face. It was Necra and she was dressed in a tight pair of black leather pants, a shirt that read "I'm not a Queen... I'm a Goddess" on the front of it, a pair of what appears to be a pair of flat shoes with strange looking golden designs running through the black material. Her long black raven hair draped down her back, and her golden eyes seemed to shimmer in the late afternoon sun. The tour guide soon appears and leads everyone inside. The main part of the asylum was done in a beautiful white marble floor, with high arches in the doorways, and pure white walls. The musty smell still lingered on the air, even after renovations and there was something that still lingered behind the closed doors of the place that no one could see... Except for Necra. She knew they were there. Some of them watched the living, while others didn't realize they were dead. The tour guide began with the history of the asylum.

Necra: (Voice Over) Death is all around us. No matter where you go in this world there are always spirits of some sort that wander the grounds. The people that once called this place home were used in experiments, wronged, and mistreated. Most of them just want peace... Others... They want revenge. They can't harm me, but they will come to me, and then cower. They know that I can make them disappear and put them to their final rest, and I know that is not what they want.

They move along the long white hallways, seeing the torn wallpaper that lined the walls in some of the rooms. Scratch marks were embedded into the stone walls from the patients nails, as they tried to get out from the confines they were in. The smell of death drifted on the air, and the sound of silent screams seemed to fill her head as she looked into the rooms as they passed. The tour group goes on ahead as Necra stops in front of a strange looking room. it had what looked like an operating table and a small table that had once held shiny metal tools that would be used in a frontal lobotomy. She stands in the doorway, as a scene seems to play in front of her.

Doctor: Once this is done, you won't have any more pain.

The doctor shakes his head, as the nurse tightens the last strap around the young woman's feet as she tries to struggle against the straps.

Doctor: You wouldn't be here if you were. Now lay still and it will be all over soon.

The young woman screams as he picks up what appears to be an ice pick, and starts to move toward one of her eyes. The vision disappears as Necra shakes her head.

Necra: Another victim... There are so many in this world, and in just a few days I will be facing off against the Pride with Elena at my side once again. But the question I have to ask is why name yourselves after lions? Are you have an obsession with Lion King?  I mean if you do I understand... I like Disney too.

Necra smiles as she continues to walk along the long stretch of hallway, feeling eyes following her.

Necra: Rachel, how many times will you try to defeat me? I mean you've managed to get what 2 wins since you've come into this company once again, while I only have 1 loss. You hold a title and you haven't even managed to defend it. When I held the Goddess Title, I defended it twice and I know that if I would have held it longer I would have been a fighting champion. Not even a two month reign... You should be ashamed of yourself.. I've watched your matches lately and you don't even have what it takes to step to me any more. Is your heart even truly in it any more? Or are you just going to be in this match for moral support for good ol' Jezebel?

Necra: I've been hanging around Johnny to much.  Jezebel I've never had the joy or displeasure of facing off against you before. I don't really know what to expect from you in the ring. hell how can you call yourself a champion when you haven't even defended your title? You haven't held it for two months yet.

Necra: By the Gods... you and Rachel are truly the same... At least when it's come to your title reigns. Neither one of you have defended... Wow... Worthless. Both of you. I know you're going to come back at me and say something smart about me running my mouth, but I really don't care. At least I'm a fighting champion, unlike you two. I beat out both of your buddies, Veronica, and Erin with the title reign, and yet you two really think that you're going to stand to Elena and I? Wow... You are truly full of yourselves and have your heads up your own asses don't you? Oh and you can bring whoever you want to ringside, because I'll have my own crew there if the rest of the Pride, or SOD or whatever the hell you are calling yourselves now come out and try to do something stupid against us. I'm not playing games, and I plan on winning, no matter what it takes to destroy the two of you.

The sound of water is heard coming from further down the hallway. She soon comes to a door that was wide open and the sight of water flowing across the marble floor She sees someone struggling in a big tub of water. This was the hydrotherapy room. She walks into the room, and sees another vision. A young man was being held under by two rather large men as the doctor stood back watching. The struggling soon stops and the two larger men back off, as the doctor shakes his head and walks out of the room with them following behind. Necra walks to the tub and looks down. He was dead, and was bruised from where the larger men held him down. She shakes her head and leans against the tub.

Necra: I know you and Jezebel are going to do whatever it takes to try and beat us, but I'm afraid you don't have what it takes to beat us. We are the tag Team Champions after all. I know this isn't for our titles which is a shame really... I mean if it was we would beat you and hold on to them that much longer. I hope you two are ready for anything that we are going to bring into this match because we are going to take great joy in defeating you and making sure you understand where your place truly is. I am the Goddess of Death, The Queen of the Dead, The Creeping Death, The Angel of Death, The Reaper of Souls, The Lady in Black, The Child of Heaven and Hell! Fear me! For when you look upon me you will see your end. See you soon and good luck... You're going to need it!

Her eyes glow red and soon they shift back to their golden color as she walks out of the room and back down the hallway. She soon rounds the corner and seems to disappear as the scene fades to black.

"When careers are coming to an end I can taste it. When wrestlers have given up on their careers I can feel it. That is the definition of The Pride. The Pride will be no more not sure as to why they have not taking the reigning tag team champs seriously considering their families are ones who take matches ever so seriously. Now me and Necra  will prove why we are a force to be reckoned with."

The cameras pan on  Elena Dread who Is applying make up on her face. She applies her usual makeup and then looks into the mirror before speaking.

It would seem that The Pride has nothing for us. It would seem like The Pride is just ducking us. Who is going to stop me and Necra?  Who really is? Honestly someone tell me? No one will stop us is the correct answer. The Pride goes around talking the talk but yet walks the walk. They Pride themselves in being more bark then bite. What  a shame I thought me and Necra were actually going to get a challenge. I thought the Pride was going to give us a run for their money? Nah and That is why I am cutting this promo short. That is why I am tired of trying and most importantly this is why mine and Necra's title reign will not be note worthy. Bitches need to step up to the plate and that is all there is to it.  Pride we will see you in the ring; Dread and terror will reign supreme. For I am The Siren of Dread!!!

Elena continues to apply her make up as the cameras fade to black.

Back to Promo Archives