*It was 2012 and inside a traditional New Jersey small apartment, Byker Bytch sits on the couch. She was 12 and just placed with Betty Pavlov and Mark Pavlov recently. This was their first placement of a child. Byker Bytch had been there a few days, and she was the only child in the home. The state worker had thought this would be a better fit*

Edar Pavlov: You …what is wrong with you?

CC: What is wrong with you?

Edar Pavlov: What is wrong is, my wife and I had hopes of getting a good child …but instead, we got you!

CC: You're looking all red like the devil, just chill.

Edgar Pavlov: You took a shyte in the washer, and the worst part is ...it had all my work clothes in it. And then you started the wash, you little fucker … go to Hades!!

CC: I picture Hades to look like this …it can't be worse??

Edgar Pavlov: Then my wife shows me this, do you know what this is?

*Edgar held up a pair of his wife panties*

CC: Well dude, if you don't know what your wife's panties look like ...its no wonder, you haven't had a child of your own. You do realize, you have to put your penis in, and shoot some sperm ...I had health class already, I can teach you if need be.

Edgar Pavlov: Listen, you smart mouth little bastard from hell ...I know these are her panties, I was wondering why they was in your pillowcase.

CC: Ok Pavlov, first off ...I Ain't Never Calling You Dad and ...your neighbor dropped them off when he was sneaking out of here. He visits while you are at work in the morning. I am in my room getting ready to go sit in the principal's office all day, and she is f*cking Thomas next door.

*The room went deadly siolent, as the grown up Byker Bytch's voice can be herd speaking*

CC Voice Over: That was when all hell broke loose. Edgar went to jail for assaulting Thomas next door. I almost felt bad for lying, and saying Thomas was f*cking his wife. But I wasn't going to admit to Edgar, that I was having fun with his wife's dirty panties. I was young, and dumb but Thomas had yelled at me, so f*ck that guy. Sorry-N-Shyte, not sorry.

*Betty Pavlov was sitting with young CC. She was unable to have kids of her own. She wanted to have a child so bad. She looked at Byker Bytch, and she looked passed the stunt that put her husband in jail. Plus her neighbor in the hospital*

Betty Pavlov: Look CC, I know you made a mistake but I still love you.

*Betty had hugged Byker Bytch, and of course being 12 and her large chest she could not help it. She was looking at a wet spot that was trying to soak through her underwear. She had excused herself, and went to her room. After some time she walked out with a hand full of tissues, and Betty watched. She was happy to see she had been crying. Wait are those her red panties hanging out of her pocket. Those tissues are not tears, and snot. Damn it CC, you play with her panties once more. Betty decided to have the talk with her 12 year old daughter she wanted to adopt*

Betty Pavlov: Look CC, it is normal for a tom-boy to feel funny around women. It's normal to get excited.

CC: Yeah, I just choke it tell it pukes …I just wish, I had 3 more hands...so I could cover it all in one stroke.

*Betty blushed, she was looking at her 2 hands and picturing 3 more. Damn it, she thought that's your daughter*

Betty: CC, you can ask me anything …

Betty: I am not answering that …

*The scene fades out, as young Byker Bytch just laughs. But sadly, that's exactly what Byker bytch did. She went to Hades quickly. For years she jumped from foster home to foster home, and at the age of 19. She started hanging out with Biker Clubs, and every time she got close to someone. They'd disappear of get killed. The scene shifts to run down bar, just outside White Hills, New Jersey*

CC: Linds, I’ll bet it’s the mind numbing arrogance you got running through your skull. I don’t know you in the Hierarchy that well, but tell me ...is completely under estimating everyone, just the thing to do with you lackluster idiots? I mean sure, if you were the better person next week. Then yeah, it could very well be your shot ...but if you think for one second, that you’re just going to blow through me ...just because you’ve given yourself scary nicknames? I highly doubt, you’re coming anywhere close to taking that Championship that night!!
*Byker Bytch reaches back, behind her waist and unstraps Woman's Xtreme Wrestling Princess Title belt we all seen before. She holds it up, so she could look at it, before speaking again*
CC: Because whether or not, our “boss” wants to admit it or not. I battled through Hades to get to this belt. I fought tooth and nail, to EARN this shot ...in a match, that I put my heart and SOUL into ...just to prove a point. You think this is your moment? You honestly believe, that after Flashpoint is over ...you’re going to be walking out, and continue on in the tournament?? Honey, you'll be lucky if you can walk back to the locker room, when we're done.
*Byker Bytch flips the Princess Title belt over his shoulder, and lets it dangle there a few moments before continuing on*
CC: You gotta pry it, from my cold dead fingers ...because, I’m not letting it go that easily!!
*Byker Bytch shakes her head again. Signifying that what she just said, was complete fact in her tattered mind*
CC: And like I told everyone last week, you better bring everything you got. Because, I don’t want to hear your lame excuses ...when you get dropped on your skull!!
*Byker Bytch flashes a deranged smirk, and speaks one more time*
CC: Linds, you're a talented wrestler and oddly ...I respect you. Yet, I'm tired of being on the losing end of things. I'm tired of being screwed over for you pretty little barbie dolls. I don't mind hurting you, if need be, and I will prove why I Am The Most Dominate Bytch In Professional Wrestling!! 'Cause I'm A Woman And Stronger Then You!! 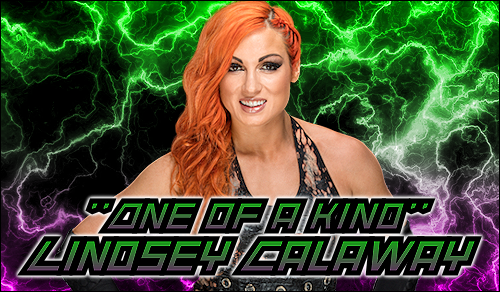 Back to Board Archive