"One Of A Kind" Lindsey Calaway

No replies to this topic


Nicknames (If Applicable): "One Of A Kind" or Princess Of The Misfits

Tendency to Cheat (Delete ALL that do NOT apply):
- [x] Sometimes

Motivation to Compete (Delete ALL that do NOT apply):
- [x] Passion; they love wrestling and don't care about winning or losing, just fighting
- [x] Punishment; they fight as a way to unleash their frustrations.
- [x] Misfit: Dose not stick to a mold and will Sticking up for people who need it

Signature Match: Anything that will get you bloody and anything she can jump off of

Entrance Description: The Lights go out and Lindsey's video comes up on the titan tron as smoke come up from the top of the ramp as Nightmare by Avenged Sevenfold plays on P.A system as Lindsey walks out. She walks through the smoke as she flings her hair back and stand on top of the ramp looking into the crowd.She holds up both of her hands in the air as she forms them into the rock and roll sign and the fans stand on their feet for her.

The fans cheer their heads off as Lindsey walks down the ramp with a smile on her face. Lindsey slides into the ring and jumps up onto the turnbuckle and looks into the crowd, pointing at some of the fans that have homemade signs for her.

Lindsey jumps down and pull her hair out of her face ,walking over to the middle of the ring waiting on who ever to come out

Biography:
Where to begin with this. Lindsey mother passed away from giving birth to her,which lead to her being bounced from foster home from foster home,till her real grandparents finally found her. Her grandfather was a military Sargent so she moved back and forth from Texas to California,which She was a punk rock kid that grew up being somewhat of a outcast, don't get me wrong she was a good kid,but getting picked,which lead to her getting into fights did make things easy on her.

One day when she was training in a ring somewhere with a few close friends who are now big name superstars. where playing out some matches which one of them was a match between the Undertaker and Mankind, her grandfather came into the room to see what they were doing he saw the move she had on one of the guys. He got a little choked up,but keept watching on. Later that night Lindsey grandparents deiced to she was old enough now to tell her who are father was and it turned out to be none other then Mark Calaway aka The Undertaker. Lindsey had already been training to become a wrestler,but this took her by surprised. Even though she was only 13, she was on her way to become who we all know and love today "One Of A Kind" Lindsey Calaway

Base Salary: Not saying

Length of Contract: As Long as the fed is open

Special Concessions (Transportation, Hotel, Time Off, Championship Bonus, Downside):
All I ask is no over booking unless need be. 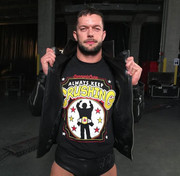 Sample Promo:
I'm pretty sure you guys have seen me Rp.

Also tagged with one or more of these keywords: Tweener